skip to main | skip to sidebar

Guess what, I lost my job this Thursday. The coach and I agreed that my selling wouldn't take flight so I'm not that sad. But when Saturday arrived I had the most magnificent headache, and instead of renovating my window gardens I... ehm... spend the day at IKEA... eating sauce bearnaise... (Forget the pork and other garnishing like ratatouille - I want the bearnaise.)

This means that for a few weeks I'll have only one job and one company to tend to. And I'm home with the kid while his pre-k is closed for summer, so I can only do classic STAHM things. I've decided to make the most of my time. I've already baked cinnamon rolls and sourdough bread, washed and folded two machines worht of laundry and cleaned one room (it's not good to overdo oneself...). Slowly, slowly I'm aproaching the moment when I'll be able to clean up my plants. First I throw away those dead skelettons, then I'll plant tomatoes, and chard, and popcorn cuttings, and chard, some herbs, and chard, one or two containers of pea cuttings, and, of course, some chard.

OooOOOOooooOOOOOooooh! This will be fun!
Posted by Rosengeranium at 9:22 PM 5 comments:

Aphids on the potato...

...are partly responsible for the delay of this post. I've spent a lot of my free time squeesing the green buggers to death. It's the only effective cure I know, although it's a bit tedious. If I'd kept the potatoes outdoors I wouldn't care about it, but since it's indoors it's hard to get a natural balance between pest and predator, and the plant is stressed byt the indoor climate. That's why a pest easily can kill it comparably fast.

I have to admit I'm maltreating my gardens right now. They get boring when pests and diseases get a hold. On saturday I've wriggled some time from the family to clean the mess up. Taking the tour with a can and a mister will get much more fun when I have prospektive seedlings to wait for.

This time I need to make the gardens as selfgoing as possible. Our economy isn't at its best and I juggle two jobs beside my company. In one way that's good for this experiment - I want the result to work for a family where both adults work fulltime. I've already planned to use selfwatering containers and am now working on a 'selfmister' of some sorts. If I had money I'd just buy a humidifier, but now I need to find something that doesn't cost me a penny.

Where did the week go?

Interesting how time flies by when you have 'vacation' (I'm still working four hours a day, although from home). I've done nothing of the stuff I thought I would do. Instead I've prioritized the family when I've been free - which means we've spent a lot of time in the childrens part of our city library (it's been rainy weather here in Sweden).

Well, I did bring out the seeds I put in the fridge for artificial winter a few months ago (ramsons and blackberries if I'm correct - I haven't looked it up in my diary yet). And we've visited one of the swedish plantmalls, but all I bought was a bag of cashew nuts. The few herb plant they sold looked sad. This is typical when you treat plants as groceries and the season of the item is over.

I've been pondering the results of my little poll. The swedish readers of Parkettodlaren wanted me to move to a house in the country, while my international (mostly from the US) readers wanted me to stay in the city. My theori is that a small home in the country is more deeply rooted in Sweden. Our collective subconsious tells us that farming (ie. growing vegetables in this case) should be done at the feet of a red little cottage with a red little barn outside town. In the US urban homesteds are more common (they are virtually unheard of in Sweden) and movements like urban permaculture have more followers. This way you don't need to leave the city to live the good life. How big this difference is is beyond me to tell, and the poll are too small to be statistically reliable, but I've noticed it before so I find it funny that it showed in such a small sample.
Posted by Rosengeranium at 9:04 PM 3 comments:

Photo reportage from the Indoor Gardener 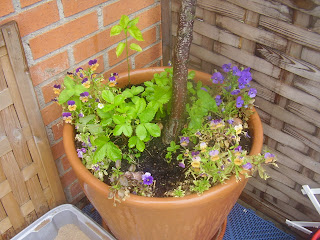 This is the feet of the cherry tree on the balcony. The tree itself is balding (I think it dried when spring set off), so I spare you that picture. This looks rather nice, eventhough the pansies have seen better days. Yesterday I poked some nasturtium seeds into the soil to have lush green leaves and perhaps a few flowers to succeed them. If you look closely you can see the first leaves of the runnerbean 'Enorma' I planted close to the tree. The idea is that the bean will grow up into the crown and cover the bald patches. Let's see how far it goes considering we've already reached July. 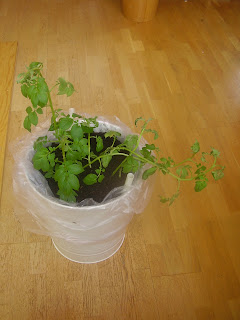 Potatoes growing indoors... I haven't used added light for this plant, that's why the stems are so thin and vinelike, but the plant is still decorative. I've completely forgotten which kind of potato it is - I put two kinds to sprout and forgot to write the names on the container. Don't repeat my mistake - it's easy to grab a marker. It'll be interesting to see how many tubers the plant will be able to form in these circumstances, I'll return with a spud count later on. 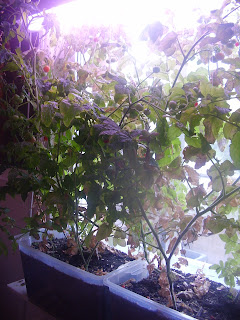 The tomatoes have had a hard time standing the hot and dry weather eventhough they stand in selfwatering containers. Thrips and illnesses are ramping about in the leaves, yet the plants still sets fruit. Now when we've finally cleaned the balcony (on the last day without rain here in Uppsala...) these are first in line to be treated. I have to cut them down entirely, I'm afraid, but tomatoes are easy to grow so I'm not that down. Besides, this gives me a chance to try those heirloom tomatoes I was given by Sesam (the swedish association preserving heirloom vegetables) on the Nordic Gardens fair this spring. 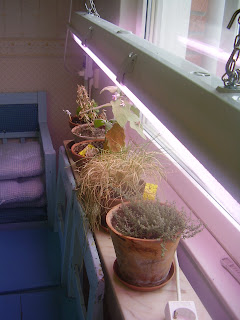 Ins't this sad? The plants' and my health are mirroring each other, so I think this is a good picture of my own state. (I've been home ill so many times it's ridiculous, fact is I'm ill while I'm writing this.) I need to cut down quite a lot here too, but I think I'll spare the lemon thyme, it've survivied everything, even the thrips. I'm still not rich enough to by biological thrips control, so I have to stay content with the oldfashioned methods of extreme cleanlyness and perhaps a small dose of pine soap water every now and then. 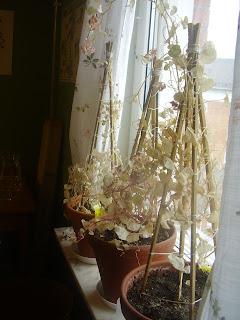 Last, but not least, the worn beauties of the study, three containers of dead nasturtium 'Alaska'. They didn't stood a chance when the heat set in since I didn't use the room and could see what was happening before it was too late. Now I've actually set up a working corner here (you can see my table and my knitting machine in the background) so perhaps the next set of plants will fare better. I'm tempted to take the easy way out and just remove the dead plants and poke seeds in the soil, but I won't; I don't know if there's "wiltering illness" (couldn't find the english term - sorry, but I think the translation says it all) in it.

Well then, now you know what I have to work with. Hopefully I'll make most of it in the week to come - depending on how much I can do per day.
Posted by Rosengeranium at 11:10 AM 5 comments:

Where should the indoor gardener live?

Why do vegetable gardening indoors?

Because I think vegetable gardening should be an option even to those living in a flat. In addition to that I like my sallad fresh and A: I tend to forget it in the fridge and then find it when it's all rubbery and soft (ie. unedible), B: at least in Sweden the sallad isn't really fresh on the shelves in the grocery store. Since I spent my childhood weeding on my own little 'kitchen garden' I prefer to grow stuff in containers. That gives you control over the soil - at least as much control as you can get.

The cherry on the top is that homegrown vegetables reduces your ecological footprint, and that I'm able to make culinary excursions in the Big Kitchen Garden.


The money will be used for containers, seeds and soil.

Homepage only in Swedish, but do have good pictures from the greenhouses and the garden displays. If you read swedish you find helpfull advice and good links. Included in the assortement are exotic plants like wines and figs as well as old swedish cultivated plants. For an international visitor this is to be considered off the beaten track and low level interesting. However the place is worth a picknick, bring your own basket and buy icecream there. If you visit the place in summer during extended weekends (thu-sun) you have the chance seeing the steam trains of the historical railroad pass by.

Instructions on how to join the campain for adopting a nursery here.

The commentary section of a blogpost often evolves into a mini discussion forum. Since I want the exchange of ideas to be held in a nice and fair manner and as spamfree as possible I've set up some rules.