skip to main | skip to sidebar

Yes, I have been surfing before, but I was more of maturing the websites in my bookmarks collection. Now I have taken time to read some of them carefully, and have even added some new. To be able to pick out the best I rethought my motif to do this experiment. The first requirement is that there's as little trouble as possible. "Trouble" in this case is to many new and complicated procedures in the growing method, too complicated containers and soils.

Hm, perhaps I should rephrase that in a positive way. Indoor vegetable gardening should be easy, leaning to the most on well known methods and should be done with stuff you can find at your home.

This rule kind of disqualified this site, Greenpinelane, were indoor gardening using LEDlights is recorded. It's hard on the eyes too, but I included it anyway, because it's a comforting fact that you can grow in such an advanced way using so simple materials. And who knows; the day we actually buy that castle sized flat downtown (posh in Sweden) I might single one room out for LEDlight cultivations.

Container Vegetable Gardening is better. Someone who really knows something about cultivation have written a short text(yes, short. You don't know how loooooooong things like this can become) about growing vegetables in containers. This is mainly for beginners, but an experienced beginner like me have use for it too, as a cheating note on what you 'should' know. I value the table at the bottom most, where you can see the size of container needed by different vegetables. (For my non-US readers; it's an US gallon ie ~3.8 litres, and an inch meassures roughly 2.5 centimeters.)

The last site is a favourite. Container Gardening: Plant and Grow Tomatoes in a Small Space for Healthy, Nutritious Meals. I may not be a fan of tomatoes, but this site gives me some tips on high producing kinds - highly sought after by an indoor gardener. Except for the fruits tomatoes are poisonous, so I think this is a plant for my future study.
Posted by Rosengeranium at 5:15 PM 1 comment: 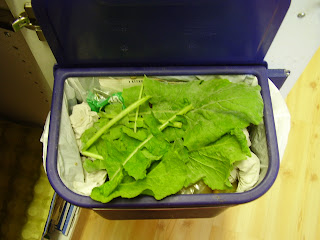 Today I removed a lot of leaves from my remaining turnips. They have turned white and moldy on the top side, so I suspect Erysiphe betae (I haven't found the common name). This irks me a bit; those leaves are good eating. Today I just tossed them. I have no idea on what to do with Erysiphe betae, neither do I know if it's possible to eat it. I need to do some more research!
Posted by Rosengeranium at 9:47 AM No comments:

Don't you think this is a nice picture. It's Biosphere2 in backlight (photographer is flickr alias ericvh, you find his profile and more of his photos here). Biosphere2 was meant to be a gigantic perpetum mobile, built as a selfsustaining eco system providing both water and oxygen to the inhabitants. Among other things you find in there is an ocean and a savanna. 1991 six persons moved in an the doors were sealed tight behind them. Nothing from the outside world were to be allowed inside, not a single molecule. The aim of the project was to... was to...

And that's what's proved to be the snag of the thing. What I learned via media at that time was that this was a scientific study to learn thing useful for longtime spacetravels (at least this is what I recall). But the bionaut soon disagreed on the aim of the project. Was it a scientific study, a business project (it was a private company that payed the whole thing), or an arts installation. People who had been friends for a long time stopped talking to each other for years, even after they had left the biosphere. That the oxygene level sunk alarmingly and that they weren't able to feed themselves properly probably added to the tension.

Perhaps the conflicts could have been avoided if anyone had taken a look at psycological studies made at persons living isolated in small groups. Because there are actually persons living under similar conditions, eventhough they don't have a bonsai ocean handy. One way is to go sailing, make a long trip and stay at sea for a very long time. Another way - the one most studied - is to go on scientific excursions in the Antarctic, living completely isolated in small groups for as long as six months.

Today Biosphere2 is managed by Arizona University, and you are alowed to visit the place. Guided tours are arranged for a fee. If I ever get a chance to visit the USA again I'll try to get there. I have a soft spot for the project. After all, my own vegetable project is something similar; trying to sustain edible life in a totally weird place. And it's worth pondering that one of the big mistakes was to not look for lessons already learned. I'll spend some more energy trying to understand ordinary indoor gardeners, as well as look for predecessors to my vegetable gardening.
Posted by Rosengeranium at 3:48 PM No comments: 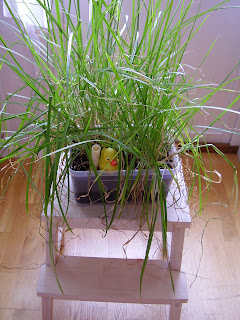 Hallo everyone! Thanks for all your kind comments!

I'm finally back. I've worked hard on my paper and was then forced to rest. Now my spirits are finally returning; I want to clean up! You know how a home looks after a member of the household has been immersed in some important task? Laundry in big piles, post (snailmail) ends up whereever there's place for it and, since our roomba has broken a brush, a heavily pebbled floor. (This particular brush has to be sent for from the USA, since the swedish retailer don't have it in stock. Why on earth sell roombas at all, then? On the other hand I wouldn't have an automatic vacuum cleaner at all if they didn't have them, so I'm only complaining a little.)

I can't complain about the spirits of my indoor plants either. Last week I used only homegrown vegetables in a casserole for the first time. Every morning I enjoy a strong lemon balm tea, which are said to restrain viral infections. By a coincindence I've discovered that sciriadae don't like when garlic are planted into the containers. I had a few cloves that had started to sprout, and I dug them down into my herbgarden just to see what happened. After a few days the little things were almost gone from the container. I have to try this out on my other gardens to see if I'm right!

The project has reach a level where it needs some check ups and evaluations, though. I now know that I can grow vegetables in containers. It's time to calculate how I am going to do to get a full amount for three persons.
Posted by Rosengeranium at 1:57 PM 1 comment:

Where should the indoor gardener live?

Why do vegetable gardening indoors?

Because I think vegetable gardening should be an option even to those living in a flat. In addition to that I like my sallad fresh and A: I tend to forget it in the fridge and then find it when it's all rubbery and soft (ie. unedible), B: at least in Sweden the sallad isn't really fresh on the shelves in the grocery store. Since I spent my childhood weeding on my own little 'kitchen garden' I prefer to grow stuff in containers. That gives you control over the soil - at least as much control as you can get.

The cherry on the top is that homegrown vegetables reduces your ecological footprint, and that I'm able to make culinary excursions in the Big Kitchen Garden.


The money will be used for containers, seeds and soil.

Homepage only in Swedish, but do have good pictures from the greenhouses and the garden displays. If you read swedish you find helpfull advice and good links. Included in the assortement are exotic plants like wines and figs as well as old swedish cultivated plants. For an international visitor this is to be considered off the beaten track and low level interesting. However the place is worth a picknick, bring your own basket and buy icecream there. If you visit the place in summer during extended weekends (thu-sun) you have the chance seeing the steam trains of the historical railroad pass by.

Instructions on how to join the campain for adopting a nursery here.

The commentary section of a blogpost often evolves into a mini discussion forum. Since I want the exchange of ideas to be held in a nice and fair manner and as spamfree as possible I've set up some rules.